With year-on-year inflation running at a blistering 4.2% in the US and the 10-year US Treasury yielding only 1.49%, one would be forgiven for thinking Treasuries are the most susceptible of the major rates markets to a continued inflation spike. In comparison, the UK’s latest 1.5% CPI print appears to show a market with very benign pricing pressures. However, we believe UK government bonds are ultimately most vulnerable to a rise in inflation and the 10-year Gilt currently trading at 0.73% does not come close to compensating for this. We felt it was worthwhile expanding on the drivers behind this view.

First, how can we see more potential for inflation risks in the UK when the US is already experiencing a higher rate? The answer to this question comes down to the speed of unlocking. Despite the UK having the lead in the vaccination race (60.6% of the population have received at least one dose vs. 51.8% for the US) the US is well ahead in the race to reopen its economy, having turned up at the start line months before the UK even got going. The US is thus the first western economy to experience the significant bottlenecks that occur when consumers are able to spend money faster than businesses can provide goods and services. Notwithstanding its importance as the world’s largest economy, this also makes the US a useful leading indicator on the path ahead for inflation in other economies as they are restarted. But it leaves plenty of potential for UK price rises, while lagging currently, to ultimately overtake those of the US.

Next, why do we see potential for greater medium term inflationary forces in the UK? The one word answer is Brexit, which we are concerned will act as a force multiplier with other global COVID-19 disruptions. Supply chains have been left in disarray worldwide, whether by shortages or transport restrictions. This is a particularly acute problem for an island that imports a significant proportion of its goods. Adding in a new rulebook for UK-EU trade (one that is still evolving) only increases the risk of some goods not making it into the UK or doing so only with inflated costs that are passed on to consumers – this is a problem that may well outlast COVID-19 bottlenecks.

Brexit’s other major impact is on the supply of cheap labour for the UK. Globally labour markets have been shocked with huge increases in unemployment, young people leaving cities and returning to live with their parents, school closures creating childcare issues and COVID-19 fears lowering participation. In addition to all this, the UK must contend with Brexit’s impact on migration patterns. Migrant workers have accounted for around 60% of the UK’s net employment growth over the last 20 years, while net migration of EU workers since the EU referendum had already fallen by 75% between 2016 and 2019. The key question is how many EU nationals who returned to Europe during the COVID-19 crisis will choose to return to the UK. There is no doubt that many people globally changed location during 2020, and we would expect most to return to wherever the jobs are, but Brexit creates an additional barrier to UK migrants’ return.

A tight labour market typically means pay rises as employers compete for labour, and it is through wage growth that “transitory” price rises become entrenched. In this regard. the UK’s furlough programme should have a more benign impact on wage pressures in comparison to the US approach of stimulus checks and higher unemployment benefits. Maintaining a link between employee and employer seems more likely to enable employers to bring back employees as needed without the (potentially spiralling) costs of finding new workers. This could also account for some of the current lag in UK inflation versus the US, but the UK cannot expect to reboot its economy without restructuring – think fewer inner city sandwich vendors and more cyber security experts. New hiring will be required in the UK sooner or later and skills shortages in certain areas could easily lead to higher wage growth, even with a backdrop of higher unemployment.

Despite enjoying over 20 years of low and stable inflation, it is worth reminding ourselves that historically the UK has always been a country more susceptible to bouts of inflation. If we look at the UK Retail Price Index (which delivers a longer history than CPI) versus the US Consumer Price Index historically, we see they generally sit at a similar level and that over time either one has scope to be higher than the other. However, as the graph below shows, drawing attention to periods of high inflation specifically it is almost always the UK rate which reaches the highest level.

For the sake of thoroughness, we can see the same phenomenon on the shorter but more like-for-like comparison of UK and US CPI. 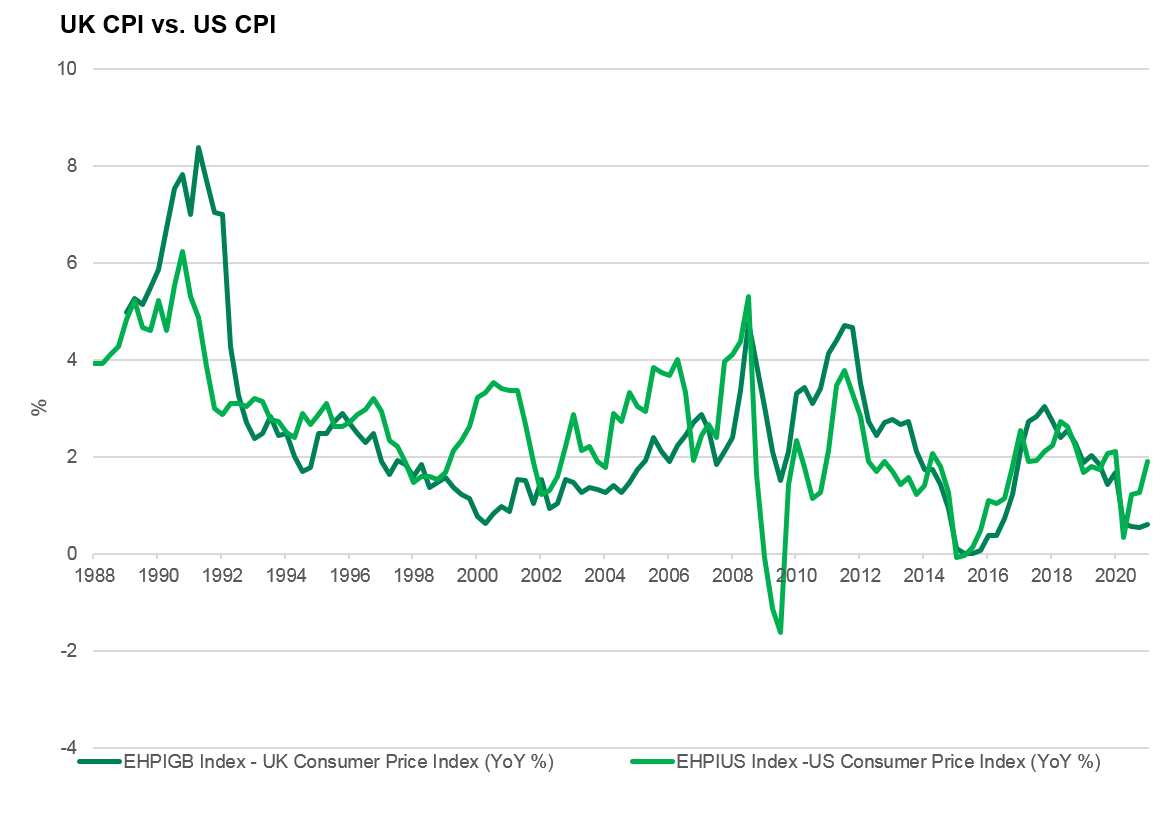 How will higher inflation impact the bond market? Given the assumed absence of credit risk, a government bond’s yield can be regarded as compensation for the loss of purchasing power that comes with inflation. If the market becomes worried that inflation is here to stay, it will demand higher yields from government bonds and their prices should fall until these are delivered. Both the US Federal Reserve and the Bank of England are very much constrained in their ability to make policy rate rises over the next 12 months, since they are set on avoiding snuffing out the economic recovery. The Fed in particular has to worry about its dual mandate of price stability and full employment. Indeed both central banks repeatedly sell the market on price rises being a transitory problem. However, inflation cannot be ignored forever by central banks; once it becomes entrenched via expectations it is very hard to eradicate. We believe the BoE will be compelled to raise its policy rate before the Fed.

In conclusion then, high quality fixed income portfolios need to be diversified and actively manage their duration exposure. Taking inflation risk in isolation, the German Bund curve appears safest with Europe’s economy recovering most slowly. US Treasuries are certainly not without inflation driven downside for investors, but for the reasons previously discussed we feel it is Gilts that pose the greatest risk of capital losses. Focusing on shorter dated bonds with higher break-evens, even at the expense of accepting the lower yields available at the front end, is our preferred strategy given the current inflation risks.