In recent months and years we have seen remarkable growth in the number of ESG-focused or sustainable investment strategies being offered by asset managers, a trend that first emerged in the equity market but is now making itself felt in the world of fixed income.

When it comes to bonds in particular, there remains a troublesome lack of harmonised rules across the industry relating to sustainable investing. There is no widely-accepted framework for data reporting and disclosure by bond issuers, for example, and investment approaches labelled ESG or sustainable can actually vary markedly from manager to manager.

With that in mind we want to provide some insight into ESG scoring at TwentyFour, with some practical examples that will help explain why our methodology scores some companies well and others poorly.

As a reminder, all TwentyFour strategies are run with ESG integration, meaning portfolio managers’ own ESG analysis is included in every investment decision they make. For those that wish to go further we have ‘Sustainable’ products, which are more aggressively screened; a negative screen rules out investments in sectors investors might expect such as alcohol, gambling and tobacco, but additionally a ‘positive’ screen is then added, which only allows investments in companies we have given  an ESG score of 34 or greater out of 100.

The rationale behind this threshold is more fully explained here, but essentially our research showed that setting the positive screen at this level can reward companies for doing the right things without necessarily detracting from returns or materially increasing volatility for investors.
But what exactly does 34 out of 100 mean? And what kind of firms might it rule out?

Firstly it is helpful to know that 34 is our threshold ‘Combined Score’. We populate our proprietary Observatory relative value database with Combined Scores from commercial provider Asset 4; each company has a Raw Score and a value for Controversies (more on this below), producing the combined number that matters for our positive screen. However, as part of this process TwentyFour portfolio managers conduct their own ESG analysis on every bond issuer they consider adding to a portfolio, and are able to override any aspect of the Asset 4 score if their research convinces them this is necessary. One factor our managers can add to an issuer’s score which we think can be crucial is Momentum, which again is explained in more detail here.

One common misconception with most ESG scoring methodologies is that they determine whether companies are ‘bad’ or ‘good’ in absolute terms, when for most the scores are in fact determined by comparing a company’s performance relative to its peer group.

As a heavy user of plastics and a producer of sugary drinks, Coca-Cola’s Combined Score of 70+ often comes as a surprise, but it benefits on a relative basis from the large number of alcohol producers that populate its beverages sector and tend to score poorly.

As the chart below shows, a Combined Score above 70 is quite rare across all industries. We found that the vast majority of firms score between 30 and 50, and the median score sits around 36; 34 is therefore not a bad score at all. 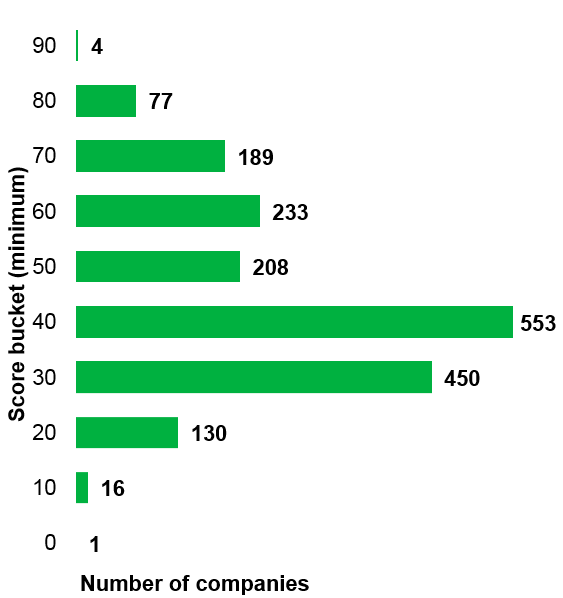 Scores include those that TwentyFour has manually overridden or has formulated itself based on the same or very similar selection criteria and questioning.
Source: TwentyFour, Observatory, September 2019

There are countless factors that can influence where a company ends up on this scale of Combined Scores. Interestingly, as a mutual with no listed equity Yorkshire Building Society (YBS), the third largest building society in the UK, isn’t actually scored by Asset 4, so its chart-topping Combined Score is purely a TwentyFour assessment. YBS scores particularly well because it pursues a number of positive societal causes, such as providing finance to underserved borrowers. It also has one of the best Corporate Social Responsibility (CSR) reports we have ever seen, listing four of the UN’s Sustainable Development Goals and demonstrating clearly how its business contributes to each.

Towards the other end of the scale (and below our chosen score of 34) we find Tesla, which as a producer of electric vehicles might be expected to score rather higher than this. However, the company scores particularly poorly on emissions due to its inefficient method of producing batteries, and its overall Environmental and Social scores are both in the bottom quartile for its peer group. This is partly a function of Tesla’s youthfulness versus its much larger rivals, which have had more time to optimise their production processes and devote resources to socially beneficial projects.

Controversies can be a killer

Tesla is a good example of how Controversies can impact an issuer’s ESG scoring. Asset 4 gives the company a rather healthy Raw Score of just under 56, but its Controversies Score of just 8/100 (partly due to governance concerns related to the amount of power concentrated in the hands of CEO Elon Musk) is enough to drag its Combined Score down to just under 32, below our threshold of 34.

In the TwentyFour model Controversies can hurt an issuer’s score very badly, since we believe they can reveal much about a company’s risk management and general ethos. One negative event may be unavoidable, so the underlying source of the issue is important, but a number of issues may indicate a systemic risk.

Spanish bank BBVA is a good example of this. Big banks tend to score reasonably well on ESG – typically they are low-emission and work hard on their ‘green’ credentials – but a Controversies Score of 20 (thanks to an alleged corporate espionage scandal) was enough to drag BBVA’s Raw Score down from 77 to less than 50.

At TwentyFour we believe that for a fixed income strategy to be truly sustainable it must be actively managed. Given the lack of data consistency and coverage in fixed income (we found from our research that nearly 50% of the investment grade credit universe isn’t ESG scored by any commercial data provider), in our view, engagement with bond issuers to fill in the gaps is paramount. We don’t see how any strategy relying on one commercial provider’s scoring methodology or tracking an ESG ‘index’ could reasonably deliver investors the detail and clarity they would want.

A good example of this active dimension is our ability to override the raw scores we import from our data provider if we disagree with them. For example, back in 2019 Asset 4 gave UK energy supplier SSE a Combined score of 31.86, with the company’s healthy Raw score of 67.49 dragged down by a poor Controversies score. First, we disagreed with SSE’s low Controversies score since this was related to a potential merger with Npower, which we saw as price-sensitive for shareholders but not worthy of ‘controversy’ status for bondholders. Second, we felt SSE’s explicit commitment to exiting coal by 2021 (they achieved it a year early) was fundamentally going to be the biggest driver of its future as a business and we wanted to reward that behaviour, hence we increased our Momentum score to 85, raising its Combined score.

Today, Asset4’s scoring has essentially ‘caught up’ with our own. It now has SSE at a Raw score of 73.66, with a much higher Controversies score of 64.06 (in the Asset 4 model anything above 50 means no concerns) allowing a Combined score of 68.86. This is very close to our own Raw score of 68, though we maintain a high Momentum score on SSE because of its push into wind power, meaning our overridden Combined score is slightly higher. For us, this is a good example of how a more active ESG scoring system can identify a company on a positive trend that should lead to a better score over time, which in our view is exactly what investors should want to see from their sustainable holdings.

The average Combined Score we import from Asset 4 for our investment grade credit universe is around 45. In general we’ve found that our managers’ own ESG analysis is harsher, which means our median Combined Score is lower at around 40, though because our positive overrides such as SSE are often substantial, our own average Combined Score is also around 45. TwentyFour PMs are fully accountable for any overrides they make, we try to be as transparent as we can with investors about our active approach and we publish a summary of our engagements quarterly on our website. By contrast, in our view passive investors will have to scrutinise the criteria of whatever ESG index their strategies track very carefully, or they may be disappointed to learn the benchmark’s interpretation doesn’t quite match their own.

In addition, for us as active managers a company’s final Combined Score is only half the story. A score above 34 doesn’t mean its bonds are automatically investible for us. Our sustainable products don’t currently own Coca-Cola bonds, for example, because despite its healthy ESG score we don’t think the bonds’ spreads are high enough to compensate for the ESG risks we see at the company.

In the next few years we do expect the lack of standardisation in ESG investment practices across the asset management industry to improve – we believe the European Union’s Sustainable Finance Disclosure Regulation, for example, is a positive step that should help provide more clarity to the end investor.

In the meantime, we believe it is down to fixed income managers to acknowledge the gaps that remain in ESG data across the bond market, and explain what they intend to do to fill in those gaps. For our part, we aim to communicate our active ESG scoring system clearly to our clients and others, and we hope the above examples will help in this regard. 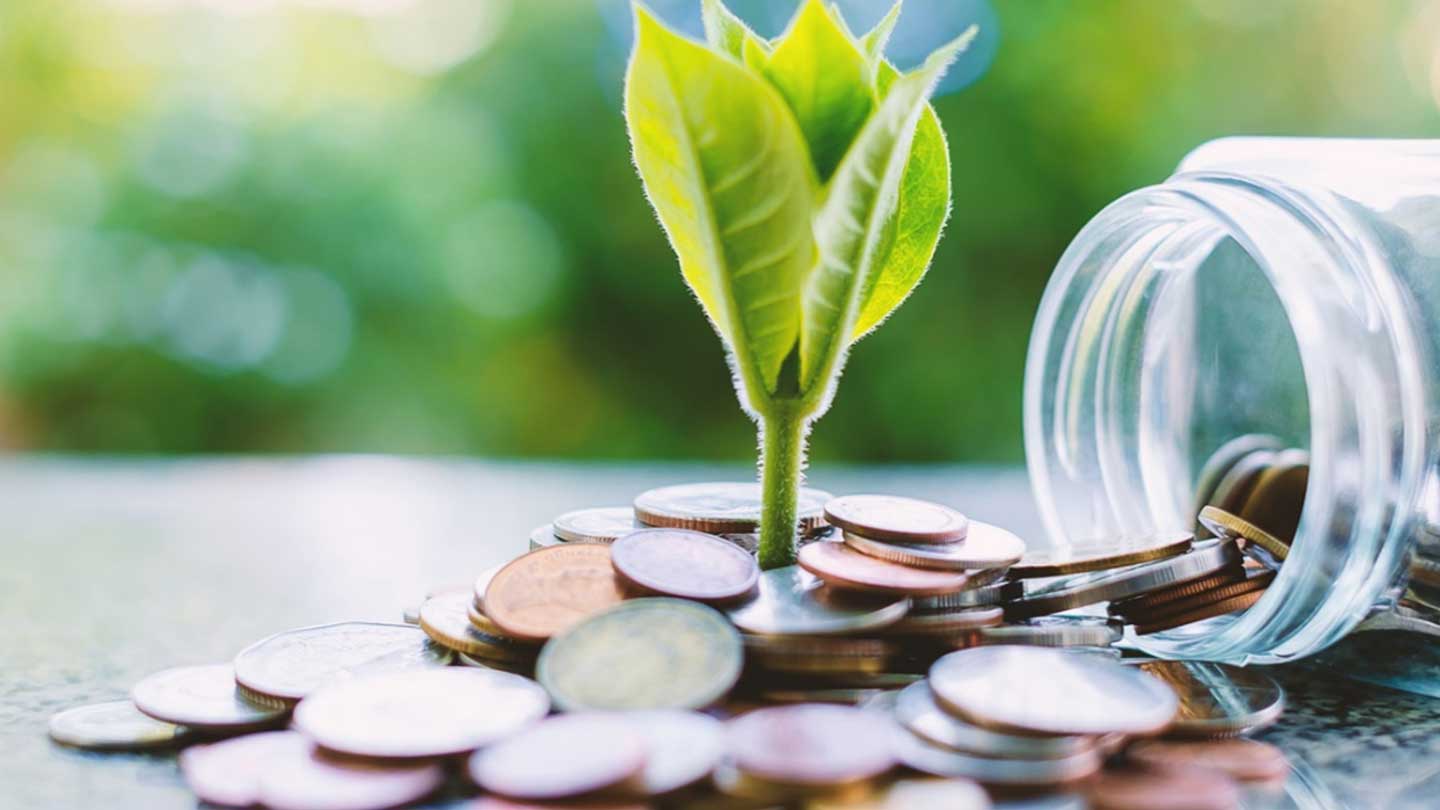 TwentyFour Asset Management launched its first sustainable fund in January 2020 and I would like to share some of the lessons we have learned from our first year of sustainable bond investing. 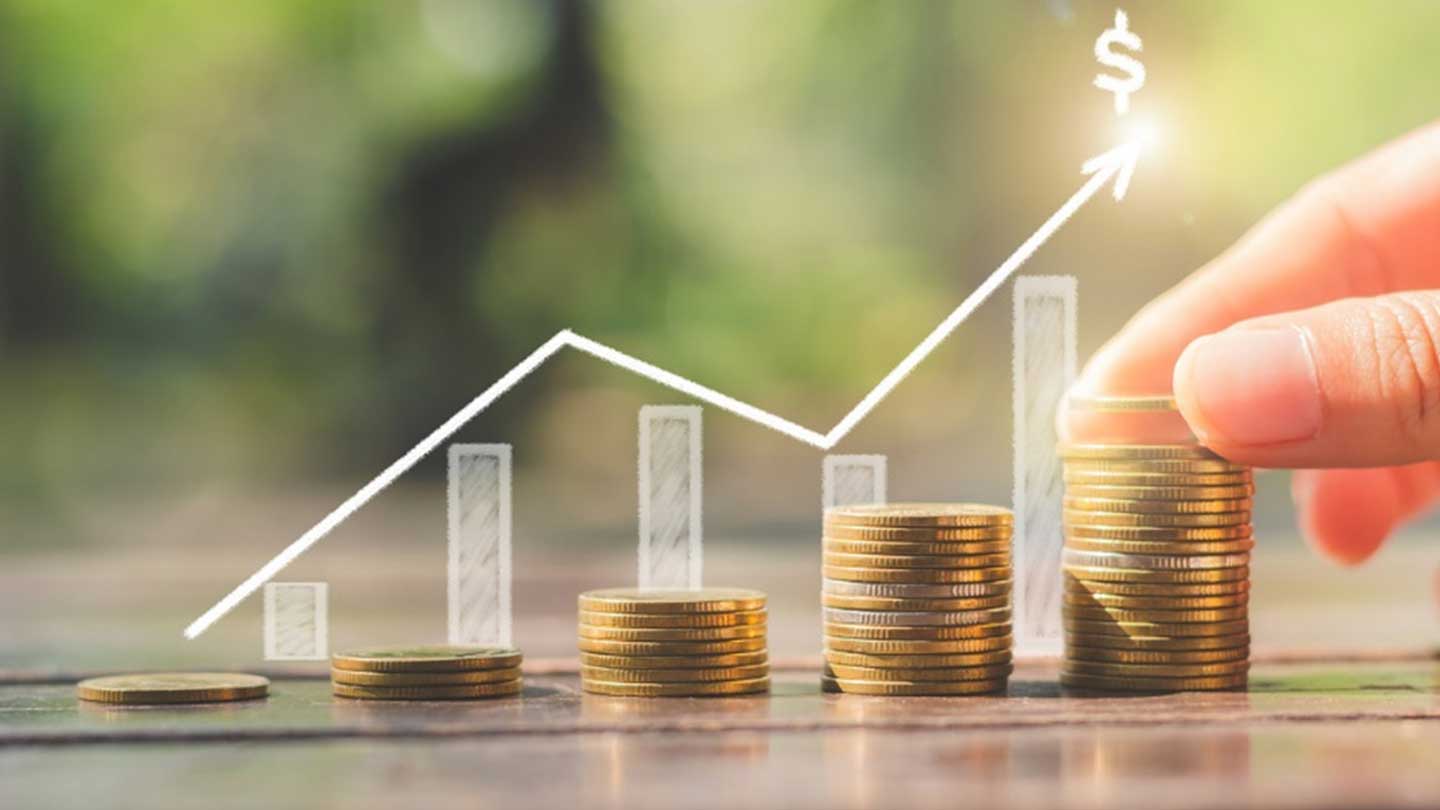 The inexorable growth of sustainable investing during the last decade is likely to continue without interruption given the experience of COVID-19 has only intensified investor and regulatory focus on environmental, social and governance (ESG) issues globally.