Our previous blog looked at the credit metrics across CLOs and their improvement during the first- half of 2021. This time, we are focussing on recent CLO spread performance and its causes.

Record supply volume characterised the European CLO market during H1 2021.The refinancing machine, which has experienced a hiatus since 2018, reignited on the back of some favourable financing conditions. Specifically, according to Morgan Stanley, public markets received roughly €15bn of new issues and 38bn of refinancing, bringing supply totals to €53bn, the highest volume since the end of the GFC.

We can identify two main drivers behind the issuance surge. The first driver is an exuberant loan supply due to the favourable macro backdrop and fiscal environment. Accordingly, the resultant waves of M&A activity and loan refinancing pushed leveraged loan issuance to €66bn in H1, a 100% increase versus the first half of 2020. The second factor pushing issuance higher is the cheap cost of CLO liabilities during the first few months of the year. Additionally, we have observed various managers attempting to refinance away from inflexible terms agreed with the Japanese buyer base in 2018/19. The market saw new large investors entering the CLO space at the beginning of this year, attracted by, among other factors, the compelling relative value and floating rate nature of the product. The entrance of new investors to the market compressed spreads, with AAA and BB reaching DMs of 0.77% and 5.6% in March (from the highs of 1.9% and 7.8% in June last year). As a result, the average cost of funding has dropped to 1.5-1.6% from the peak of 2.5% last year, making the CLO arbitrage very attractive for equity and CLO managers. 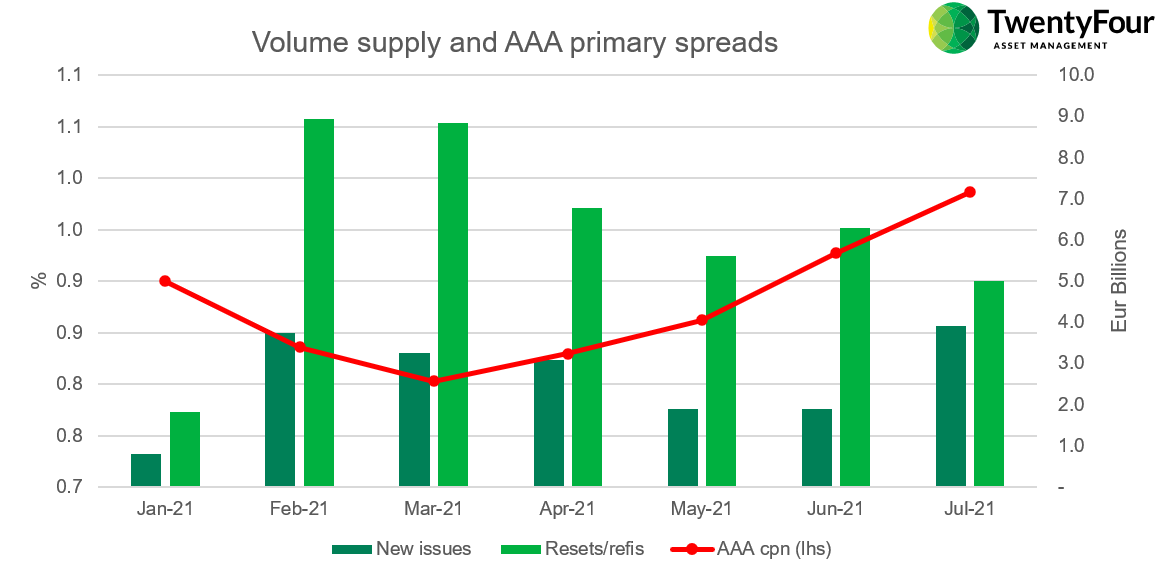 If we look at spread moves year to date, they are mostly tighter across the stack, with the belly of the structure outperforming, followed by the sub-investment grade and the senior tranches. However, as mentioned already, technical factors profoundly influence the CLO market. Accordingly, the unprecedented surge in supply has exerted pressure on spreads, particularly in primary issues, causing AAA spreads to widen in the latter stages of Q2. Other factors might have also influenced the demand surge for AAA over recent months. One such factor is the drop in the Euribor floor benefit embedded in CLO tranches due to the potential for sooner than expected rate hikes, given CLO floating-rate coupons are usually floored (from 40bps in March to 25bps end of June, Eur swap curve 3m vs 5y).

Second, the moves in hedging costs with the EUR/USD cross-currency basis compressing further and making AAA bonds less attractive over the US ones.

After a hectic first half of the year, most investors, including us, were hoping for a dull summer to recharge our batteries, but it seems there’s no respite from the CLO machine. The month of July saw 22 deals coming to the market, and there are at least another 12 currently primed to do so. It shouldn’t, therefore, be a surprise to see deals printing with AAA coupons in a range of ~1-1.1%. Meanwhile, mezzanine spreads continue to show more resilience and stability due to their smaller size and different investor base.

Clearly, AAA paper yielding over 1.1% yield in euros does look attractive compared to any other fixed-income product, and more investors might notice it and enter the market. Whether this widening will prove short-lived or not is hard to predict. The dovish ECB stance already helped regain some of the relative value lost on the Euribor side in the past few weeks. Different factors will affect the spread dynamics over the coming months. We expect the refinancing/reset wave to continue, albeit at a slower pace. According to BAML, there are still 220 deals callable by the end of 2021. However, only a few of them are likely candidates to reset. Some deals in the money at the beginning of the year are no longer due to wider AAA spreads, and we expect to see most of the 2020 vintages reset going forward.

As a result, some of the pressure on primary spreads could ease. But, conversely, the macro and fiscal environment, easing restrictions and uncertainty over the Delta variant will continue to be crucial factors for the functioning of the market and the CLO, in common with broader fixed-income.

Only one thing is sure: CLO bankers won’t be able to go on holiday this summer.

Vontobel Fund - TwentyFour Monument European Asset Backed Securities
If you're not from the United Kingdom or Ireland, click here to visit the Vontobel Asset Management website