Corporate hybrids have evolved in recent years into a large and well-established asset class within the European fixed income market, with €185bn of bonds outstanding.

Hybrid bonds are typically issued by European investment grade companies (though we are increasingly seeing issuance from corporates in other geographies as well) and are subordinated to the senior debt of those issuers. One of the main features distinguishing a hybrid from a senior bond is maturity, or rather its lack thereof. A hybrid typically does not have a set maturity but instead a call schedule, with the general expectation that the hybrid will be called at the first call date. As a result, hybrids are typically rated two notches lower than corresponding senior bonds from the same issuer. They also tend to give investors higher spreads, as compensation for the risk that the hybrid will not be called, often referred to as ‘call risk’ or ‘extension risk’.

As investor sentiment was deteriorating rapidly in March, hybrids underperformed senior debt. At the trough of that sell-off hybrids were down more than 13% year-to-date while regular European corporate bonds were down about 7%. This is not surprising as, being a subordinated instrument, investors can expect hybrids to trade with a higher beta. For investors, one of the key risks when considering hybrids comes from the issuer not replacing or repaying the instrument at the first call date. If investors start to believe a non-call is a possibility, the market will tend to reflect this and start pricing the bonds to perpetuity instead of the first call date. This leads to a material increase in duration and a steep decline in the price of the hybrids. In March, we witnessed the market worrying about the extension risk on top of the obvious general increase in credit risk as a result of COVID-19.

A good way to capture investor sentiment towards this risk is by looking at the spread differential between hybrids and senior corporate bonds. As a general rule, the smaller the differential the more confident investors are on hybrid issuers calling their bonds; when differential widens it usually reflects investor concern. As exhibited in the graph below, prior to the March sell-off, the sub-senior spread was around 100bp. By the end of March, the spread differential had widened significantly to 450bp. Since then, as we get more clarity on the extent of the recession, we have seen a contraction of this spread towards the long term average of around 200bp. 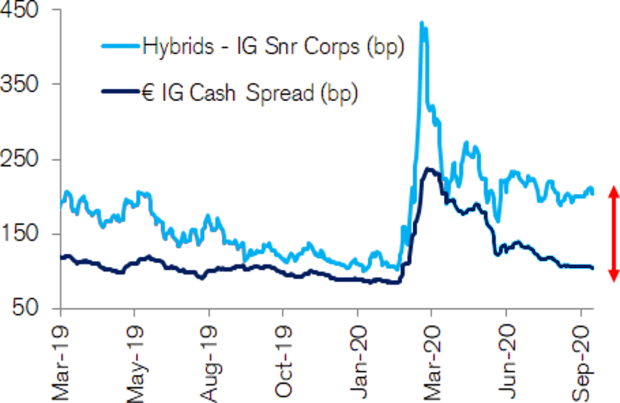 Another consideration is of course credit risk. The vast majority of hybrid issuers are listed, well-covered European IG corporates, operating in key sectors such as utilities or telecoms and with a relatively low risk profile. When investing at the subordinated level, investors will be exposed to the same default risk from a well-known IG rated issuer than if they had invested at the senior level. The subordination of the instruments means investors demand a premium, and a good way to look at the relative attractiveness of this risk premium is by looking at the spread multiple investors get on the hybrid curve over the senior curve. In a recent note to investors, Credit Suisse analysts looked at this multiple over the last three years. They found that it usually fluctuates in a range between 2x and 3x. Back in February and prior to the Q1 sell-off, this multiple stood at around 2x. As markets started to recover from April onwards that multiple started to increase, and by the end of September it had reached 3.0x having been 1.9x at the end of March. Central bank support, alongside the fact that higher quality bonds tend to lead the recovery in asset prices, resulted in a faster recovery of senior spreads than hybrid spreads. The ICE BofA Euro Corporate Index currently has a spread 106 basis points, which is actually 2bp inside where it began 2020. Over the same timeframe, hybrids have also benefitted from spread compression on an absolute basis, but on a relative basis they have been outstripped by senior bonds and have looked increasingly more attractive. Today an IG investor can get three times the spread they would achieve at the senior level by investing in a security which has the same underlying default risk. 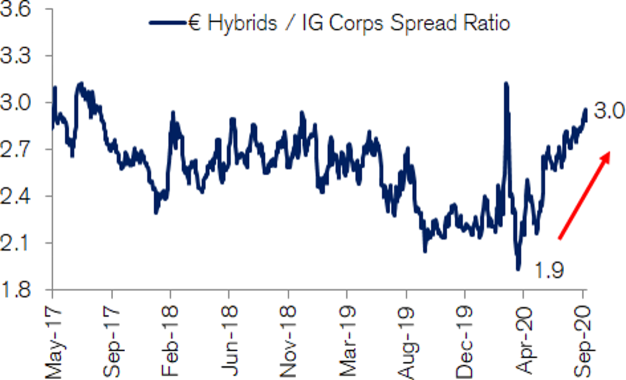 European companies often issue hybrid capital to anchor their ratings. Investors give extension risk a lot of attention, and rightfully so. Rating agencies have been instrumental in normalising the product and give issuers a 50% equity credit on hybrid debt. Issuers would lose the equity credit they get from S&P, for example, should they choose not to call and replace a hybrid. This equity treatment was the main reason many issuers came to the market in the first place, and the consensus view is that it almost always makes economic sense for an issuer to call its hybrids. Hybrid extension has historically been a very rare occurrence, as it can damage investor sentiment towards an issuer and lead to an increased cost of capital. Careful credit work and a focus on fundamentals remain critical, but in general these are powerful forces for management teams at IG European firms, meaning historically hybrid extension risk has proved to be low.

As we are slowly emerging out of the COVID-19 recession, the outlook remains very uncertain. It is however the start of a new cycle and many investors will want to find a way to express a pro-cyclical view without taking on too much credit risk. Hybrids would appear to offer the right investment characteristics for this part of the cycle. There is limited credit risk as the underlying risk is associated with well rated and well understood investment grade companies. The senior spread is well anchored by central bank support and the sub-senior spread looks attractive compared to its pre-pandemic level.

The hybrid market is deep and typically liquid, offering many relative value opportunities to express a pro-cyclical view effectively in a bond portfolio.

Vontobel Fund - TwentyFour Absolute Return Credit Fund
If you're not from the United Kingdom or Ireland, click here to visit the Vontobel Asset Management website