One topic that is beginning to gather headlines again is the terms of any bilateral agreement between the UK and European Union once Brexit is finally completed at the end of this year, with the latest round of negotiations breaking up a day early this week as both sides said they were still far apart on a number of issues.

The process was delayed by the onset of the COVID-19 pandemic, meaning this was the first in-person meeting for three months, and while the talks could be hampered further going forward, the UK have stated clearly that it does not want to extend the year-end deadline.

As talks stalled amid the COVID-19 outbreak, the optimism and improved sentiment that had been evident at the start of the year also evaporated, and with it went the tightening of the ‘Brexit premium’ that had boosted the performance of sterling credit since mid-2019. On a slightly simplified basis, looking at the performance of the Euro HY index against the Sterling HY Index (simplified because they have different maturities), the asset swap spread between the two indices was around 180bp at the end of August 2019; this tightened significantly as a “softer” negotiated Brexit began to look more likely, and had tightened to 100bp before the March 2020 sell-off. As the sell-off took hold, the spread widened to over 200bp (though we should note that with liquidity being poor at the time, this may not represent actual transactional spread differentials) and currently the spread sits at just over 150bp.

As mentioned, looking at the simple indices doesn’t give you a true picture, so we have attempted to reconcile a number of global indices to give a more accurate representation of the potential value available. We have taken high yield markets as an example, but we see the same trend in other areas of the market such as financials or investment grade credit. The table below shows the sterling, euro, US dollar and Emerging Markets (EM) $ HY indices, all of which have different maturities and various average ratings, but the column on the right shows our extrapolated spread for a 5-year, BB- rated version of each index. 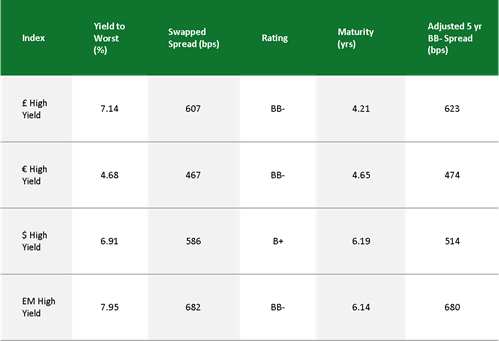 The first thing to point out is that the EM HY index has the widest spread, and for most readers, this won’t come as any surprise. What will probably come as a surprise is how close the sterling spread is to what’s available in emerging markets. To put this into perspective, the UK is a G7 nation, has its own independent central bank with a reserve currency, and a recently elected stable government.

You could of course point to the UK’s debt-to-GDP ratio (now above 100%) and the substantial amount of aid being pumped into the economy by the Bank of England and the government as obvious negative factors, and of course the path ahead is going to be difficult, but which nation isn’t in the same situation in the aftermath of the pandemic?

Leaving aside the macro picture, for active bond investors the sterling credit market represents a very attractive pool to go fishing for relative value, given it offers such an attractive spread premium over the euro and dollar markets. The sterling market is small, with the GBP HY index being just over 10% of the size of its euro equivalent, and investors need to select businesses very carefully. In addition, investors cannot assume that we will ultimately end up with a “good” Brexit, but we see plenty of longstanding, well-capitalised, low-leverage and profitable business that would only be marginally impacted by a “hard” Brexit, and some wouldn’t be impacted at all by either outcome; would a UK building society have to shelve plans to expand into Europe on a hard Brexit? No, they are UK centric and will remain so.

It is also worth pointing out that the performance of sterling credit has also been impressive, with GBP HY returning 23% since the end of May 2016 (going back far enough to include the Brexit vote), while on a hedged return basis, the euro HY index has returned 19% over the same period.

The Brexit negotiations are likely to create some fraught periods in the market and some heated moments for both sides in the remainder of this year, but in our view the significant premium available continues to be well worth harvesting.