In early November the UK’s Financial Conduct Authority (FCA) announced an extension to the existing payment holiday scheme, first introduced in March. This will permit borrowers a maximum payment deferral period of six months in total. There again appears to be a low threshold for being granted a deferral, and we expect a second series of payment holidays following a strong decline over the summer in the number of borrowers deferring payments.

The divergence in levels of payment holidays across Europe can in our view be explained by differences in income support policies between countries. We mainly attribute countries with low levels to having existing and well known labour support policies in place (which tends to be the case in the euro area). The UK has been more generous through offering payment holidays widely in addition to its job furlough scheme, which helped to improve the ability of borrowers to service their mortgage debt. For example, Dutch lenders individually assessed requests from borrowers, resulting in payment holidays as low as 0.9% on average in Dutch RMBS. UK banks meanwhile were guided to act on an ‘ask and receive’ basis; borrowers asked in larger numbers, some as a precautionary measure, and a large majority have resumed their interest payments after the initial period of three months.

Having modelled closely how we expected this first series to play out, we have closely monitored developments and their potential implications for RMBS transactions. As you can see below, payment holidays in UK prime RMBS reached 17% on average for three months, but the majority were not extended and the proportion of payment holidays has now fallen to around 3%. Non-conforming deals from challenger banks and specialist lenders, which typically comprise loans to lower quality borrowers, saw a higher take-up rate for payment holidays of 30-40%. However, again we estimate that more than 80% of these borrowers have now resumed their payments. 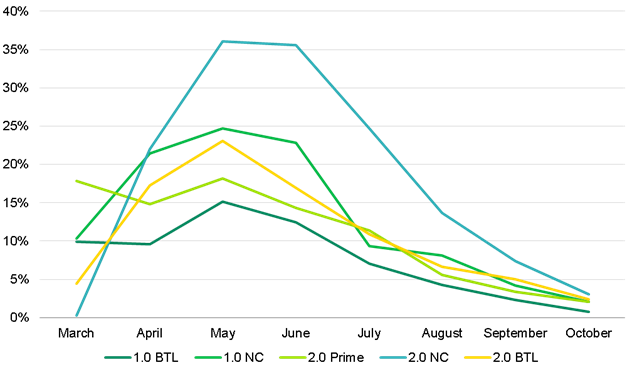 Source: RMBS Investor Reports, Intex, TwentyFour, 30 October 2020. This does not include all UK RMBS deals however TwentyFour believes it to be a fair representation of the market.


The impact of payment holidays on UK RMBS has been primarily limited to some short term drop in excess revenues, which are now recovering as borrowers resume their payments. RMBS are structured to sustain varying recessions with multiple support mechanisms including excess revenues, subordination and a reserve fund. There were a select few legacy (pre-2007) UK RMBS deals which saw their reserve funds partially drawn, only to see a full replenishment in the next period.

As the take-up rate for payment holidays has normalised to single digits, we again affirm our view that a second series of payment holidays will not present a credit risk for UK RMBS, and we can use the first series data to better calibrate our model for expected future performance. As an example, we look at TOGET 2019-1, a UK Non-Conforming transaction with a weighted average pool interest rate of 5.5%, issued from the specialist lender Together. Payment holidays in this loan pool reached 31% in July, but had dropped to 7.7% by the end of September and 2.5% by the end of October. We calculate this transaction could sustain a 30% level of payment holidays over the next 24 months without drawing on its reserve fund, which is only the first protection mechanism for RMBS bondholders. In addition, the bonds are well protected for any deterioration in mortgage performance. The BBB rated Class D notes could sustain an annual default rate of 10% at the end of the payment holiday scheme without taking any principal loss, which corresponds to cumulative defaults of 50% over the life of the transaction.

With six months of hard data behind us we have a much more informed view of the impact of payment holidays, including which borrowers and ABS deals are more susceptible. Fundamentally we feel that the second series will see a smaller number of borrowers impacted and fewer borrowers looking for additional relief overall, since economic uncertainty is now lower than it was in the early days of the COVID-19 pandemic when the initial scheme was launched. However, those that do accept assistance are more likely to be in critical need and represent a greater future foreclosure risk. While we continue to believe that payment holidays do not present a major credit risk for ABS, mortgages losses historically are correlated to unemployment; we do expect unemployment and mortgage arrears to increase in the coming months in the UK and across Europe, though arrears do not automatically translate into loan losses.

Underwriting standards tightened dramatically in the UK and elsewhere following the global financial crisis in response to tighter regulation and greater transparency, with affordability stress testing and the ban on income self-certification as two examples. In addition, the low interest rate environment post-crisis has reduced interest payments for borrowers, improving their ability to service debt and thus reducing the likelihood of defaulting on such low payments. During the crisis, loans 90+ days in arrears originated by prime lenders increased to 1.3% in the UK and 0.5% in the Netherlands at the end of 2009 (this compares to a current level of 0.3% in these two jurisdictions). Mortgage default rates meanwhile reached 0.3% and 0.1%, respectively, in UK and Dutch prime RMBS. During the crisis, principal losses incurred by all EMEA ABS, RMBS and CMBS transactions – across all ratings – increased to just 0.92%, according to Moody’s, despite unemployment peaking at 8.5% in the UK and 12.1% in the euro area. These principal losses were heavily skewed towards CMBS, and the overall number (as we have mentioned several times) was extremely low when compared to US ABS.

So while we certainly expect unemployment to increase across Europe, and we expect more borrowers will fail to pay their mortgages, we believe current mortgage performance is very far away from a level that would threaten coupon and principal payments in the major European RMBS markets.

Where Next for Treasuries and Rates

Vontobel Fund - TwentyFour Monument European Asset Backed Securities
If you're not from the United Kingdom or Ireland, click here to visit the Vontobel Asset Management website