The current US economic expansion is now the longest in modern history, and investors globally will be seriously contemplating the end of the credit cycle.

This late-cycle period could prove particularly challenging. Government bond yields are much lower than they have been towards the end of previous cycles, and central banks’ official projections for interest rates have become increasingly divergent from those of investors.

1) Credit duration down, credit quality up

Once a cycle shows signs of ageing it becomes a lot more vulnerable to external shocks or surprises. Coupled with relatively lofty credit valuations, we believe this signals a time for dialling in risk and having more balanced portfolios, to have a better chance of ensuring capital preservation should the cycle come to an unexpected end.

One tactic that can achieve this is to shorten the maturity of credit positions. Shorter dated bonds give extra comfort; they are typically better protected from market volatility, and the closer principal repayment dates offer a degree of support for prices with a ‘pull to par’ effect. Another tactic is to increase credit quality. The average rating of our Strategic Income strategy, for example, has been methodically increased from BB+ in January 2018 to BBB+ at the end of May 2019.

Based on the representative portfolio and since its inception.
Source: TwentyFour, May 31, 2019

US economic data supports the continuation of the current cycle, but there are growing signs that the economy is slowing and the trade tariff disputes could potentially escalate out of control. Markets are looking to central banks to engineer an extension of the cycle.

The outlook is growing more uncertain and market sentiment becoming more cautious, hence our belief that aggressive risk taking is unlikely to be rewarded and portfolio positioning needs to be more balanced and prudent. In mid-2016 our Strategic Income strategy’s allocation to core government bonds and cash was under 10%, but this had risen to around 20% by late 2017 and around 30% by late 2018. In addition to this increased cash allocation to ‘risk-off’ assets, the interest rate duration of the allocation (its sensitivity to changes in interest rates) has also increased gradually to help act as a buffer should it be required. 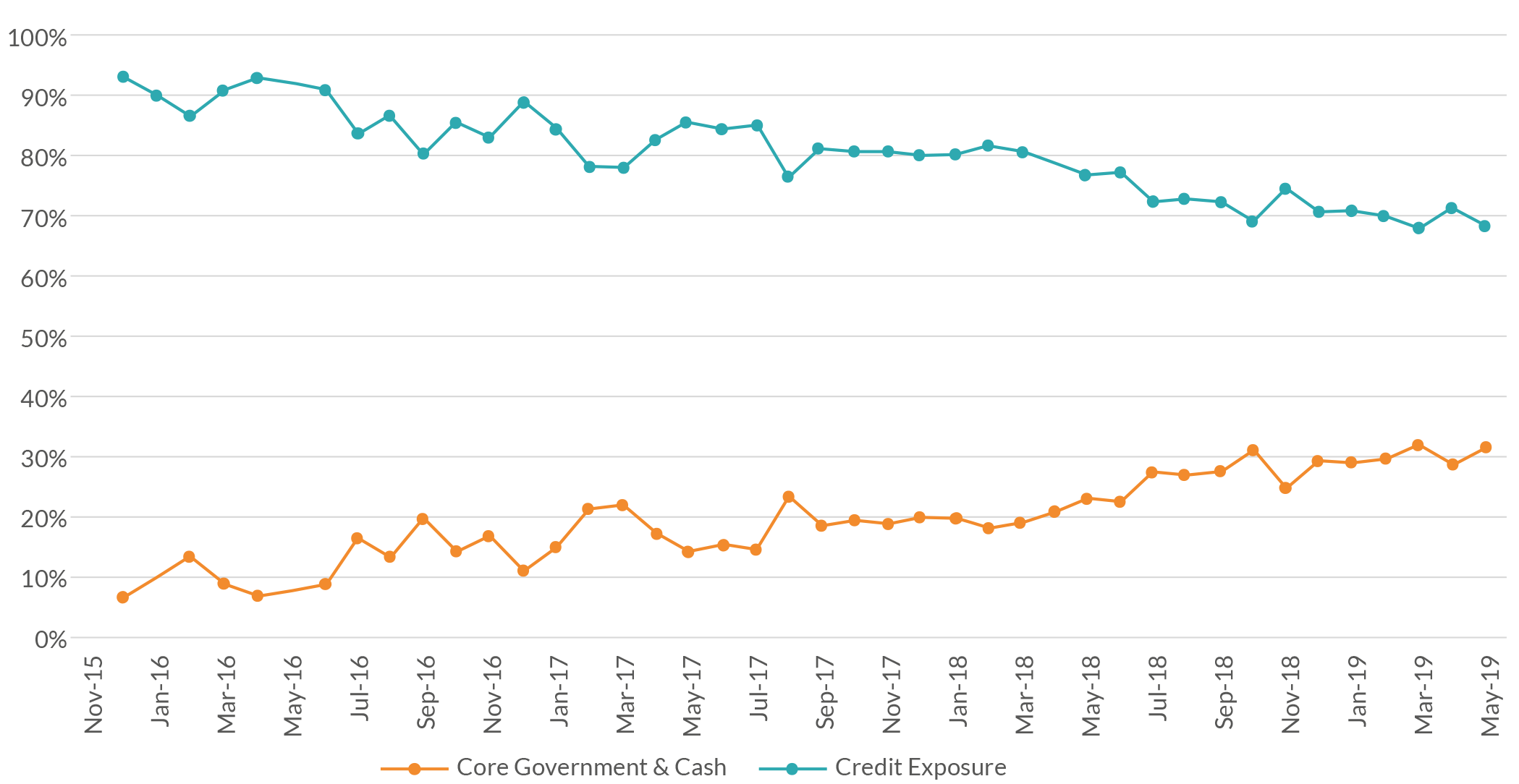 Based on the representative portfolio and since its inception.
Source: TwentyFour, May 31, 2019

Holdings in risk-off assets are there to try to protect returns rather than generate them, so selection must be made on the suitability for protection and not yield. So while increasing or lengthening rates exposure can be an effective and efficient way of achieving a risk-off bias for a fixed income portfolio, it is important to identify the government bonds that have the most to gain should conditions continue to deteriorate.

At the moment, we think that means US Treasuries, and to a lesser extent Australian government bonds. Brexit uncertainty makes the Gilt market an uncomfortable place for us to be, and while holders of euro sovereign bonds have made gains on recent dovish stance from the European Central Bank, there simply isn’t enough yield currently in that market to offset a real downturn.

We believe avoiding riskier names and sectors is important in late-cycle investing, but tracking down the remaining pockets of value is equally so.

One of these pockets, for example, is in European credit markets. After a decade of expansion, corporate leverage is far lower in Europe than in the US, which points to lower default risk in the event of a recession. Despite this, on a currency- and rating-adjusted basis, the euro high yield index currently carries a spread of around 380bp at the five-year maturity, versus just 313bp for its US equivalent.

Another is in UK credit, where since the 2016 referendum there has been a ‘Brexit premium’ over comparable euro and dollar paper, which we believe is primarily a result of foreign investors shunning sterling assets for fear of large currency fluctuations in the event of a ‘hard’ Brexit. However, there are a number of sterling borrowers with little to gain or lose from a ‘hard’ or ‘soft’ Brexit, and by keeping exposures short we can look to extract the premium safely in these names.

Given the current trends in economic data and the broadly accommodative stance of global central banks, it is quite possible that this cycle still has another 18 months, or even longer, to run. And as the current cycle has demonstrated on numerous occasions, the path toward the next recession is never smooth, and periods of spread widening can often be buying opportunities, even at this relatively late stage.

As such, as a fixed income investor it is a good idea to stay highly liquid and nimble in order to react to changes in conditions, and any associated opportunities. Put simply, this means holding a higher portion of your portfolio in cash or cash equivalents, which can be quickly liquidated and re-allocated to other asset classes, geographies or individual bonds should they begin to offer relative value.

What are AT1 bonds, and how do they work?TwentyFour Income Fund - Investor Update PresentationFive questions for bond markets in 2022

Why The Inverted Curve is Not Good News