Everything you need to know about ABS

Asset-backed securities (ABS) are a type of bond, typically issued by banks or other lenders.

What makes ABS different to conventional bonds, such as government or corporate bonds, is that they are ‘secured’ against a diversified pool of loans with similar characteristics.

This collateral pool will typically contain thousands of assets such as mortgage loans, and the interest and repayments on those assets are directed straight to investors in the bonds.

This is where the phrase ‘securitisation’ comes from – investors’ coupons are secured by the cash flowing from the regular repayments on the loans included in the pool. In other words, the credit risk in ABS transactions is limited to the quality of the assets.

Why do firms issue ABS?

ABS is one way banks and other lenders fund their businesses. Their motivation for doing so is no different to that of any government or company issuing a regular bond – to borrow money against future revenues.

The difference with ABS is that it funds a specific pool of assets, and is backed by the proceeds from those assets, instead of the general financial strength of the issuing company.

For the issuer, one big advantage of ABS is that it offers ‘matched funding’ or ‘term funding’ – instead of selling normal corporate bonds to investors and then distributing the funds around the business, ABS funds a specific part of the balance sheet for a specific period of time.

For the ABS investor, the advantage is you are effectively being paid by the pool of loans backing the bond, rather than the company you are buying the bond from. If the issuing company was to go bankrupt, your coupons would continue to be paid, since the underlying borrowers in the loan pool are still making their payments each month.

How does ABS actually work?

The bonds that are sold via ABS transactions are structured into different seniority layers, or “tranches”, which each carry a certain risk and return profile based on their position in the capital structure.

For illustrative purposes to demonstrate the typical structure and not based on a particular security. Source: TwentyFour

Much like the illustration above, the highest ranked bonds (and thus lowest risk) are typically triple-A rated and pay the lowest yield but they are first in line to receive interest and principal payments from the asset pool, which flow like a waterfall down the layers.

These AAA notes are further protected by their seniority in the structure. The lowest rated tranche at the bottom is the first to absorb any losses caused by defaults on loans in the pool. Importantly, only defaults where a resulting loss occurs create an impact on the ABS deal. Loans often come with collateral like a residential home, car, commercial property or recourse to the borrower’s other assets, so a default doesn’t necessarily mean a loss for the lender.

However, structural features built into ABS to protect investors, such as a cash reserve fund that sits below the entire bond stack to help cushion against losses, make this extremely rare, particularly in European ABS.

The video below runs through how these features work in practice for a typical RMBS transaction but the same would generally apply regardless of asset pool.

The features of European ABS

Yield – ABS normally offer a higher yield for a given rating or maturity than more mainstream investments such as government or corporate bonds. This is partly due to the product’s perceived complexity and more comprehensive underwriting process – it also remains a largely under-researched and poorly understood market in our opinion and we think this adds to the associated complexity premium.

Inflation protection – ABS in Europe are virtually all floating rate, with near-zero interest rate risk. This means they're expected to be far less volatile than fixed rate bonds when inflation is high or in periods when interest rates are rising.

Diversification – ABS offers direct exposure to consumer credit risk, which is useful for those looking to diversify a bond portfolio away from more common government and corporate risk; history indicates that ABS have an extremely low, or even negative, correlation to the performance of traditional asset classes.

Flexibility – ABS has something for every risk appetite. It is probably the most flexible part of the fixed income universe, with opportunities to invest across the full spectrum of ratings from triple-A to single-B and even unrated.

Investor protection – ABS transactions are structured into layers of risk, with the issuer taking on any initial losses and the junior tranches acting as loss absorbers to the more senior ones. The assets sit in a legal entity fully separated from the issuer of the ABS, thereby protecting them from outside events such as a lender's failure.

Low defaults – ABS has historically demonstrated a very low default rate through several economic cycles. This is a result of the typical asset quality backing deals, the aforementioned protections for bondholders, as well as the fact that that this protection typically builds over time as the underlying loans pay down, with tranche more likely to experience upgrades than other bond markets.

Transparency – Issuers provide frequent reporting detailed enough to view the performance of each individual loan in the asset pool, enabling investors to forecast, stress test and have confidence in their performance.

Why does ABS have a bad reputation?

ABS is often cited as the chief culprit in the financial crisis of 2008, and while certain parts of the market were certainly at the centre of the fallout, we believe there are fundamental misconceptions about its role that persist to this day.

Essentially, the crisis began with weak lending standards in the US allowing some poor quality loans to be packaged into ABS products (US ABS). The prime example was mortgages given to “sub-prime” borrowers who were less likely to be able to keep up repayments through the following recession. When borrowers began to default on these loans in large numbers in 2007 and 2008 – as US house price growth began to slow – the lowest tranches of US ABS transactions backed by these mortgages began to suffer losses and their value dropped.

It was a range of other flaws in the financial system – mostly unrelated to ABS – that turned this localised US housing market slowdown into a global liquidity crisis and economic recession. Loose regulation had allowed financial firms to take on large amounts of leverage and develop a string of complex derivatives products in the early 2000s. The opacity of this system exacerbated the crisis as major global banks began to worry about their rivals’ exposure to the sub-prime market, and stopped lending to one another.

European ABS vs. US ABS

The biggest misconception, however, is that the European and US versions of ABS are the same thing. They may share the same acronym, but there are fundamental differences between the two that enabled European ABS to actually perform as expected through the financial crisis.

Losses in the US market were ten times those in Europe. In addition, every year since 2009 realised losses in Europe have been zero, and Fitch’s expected lifetime loss rate for every European ABS issued since 2009 is also 0.0%.

There are three main features of European ABS that we believe make it more investor friendly than its US counterpart:

+ How big is the market? + How active is the primary market? 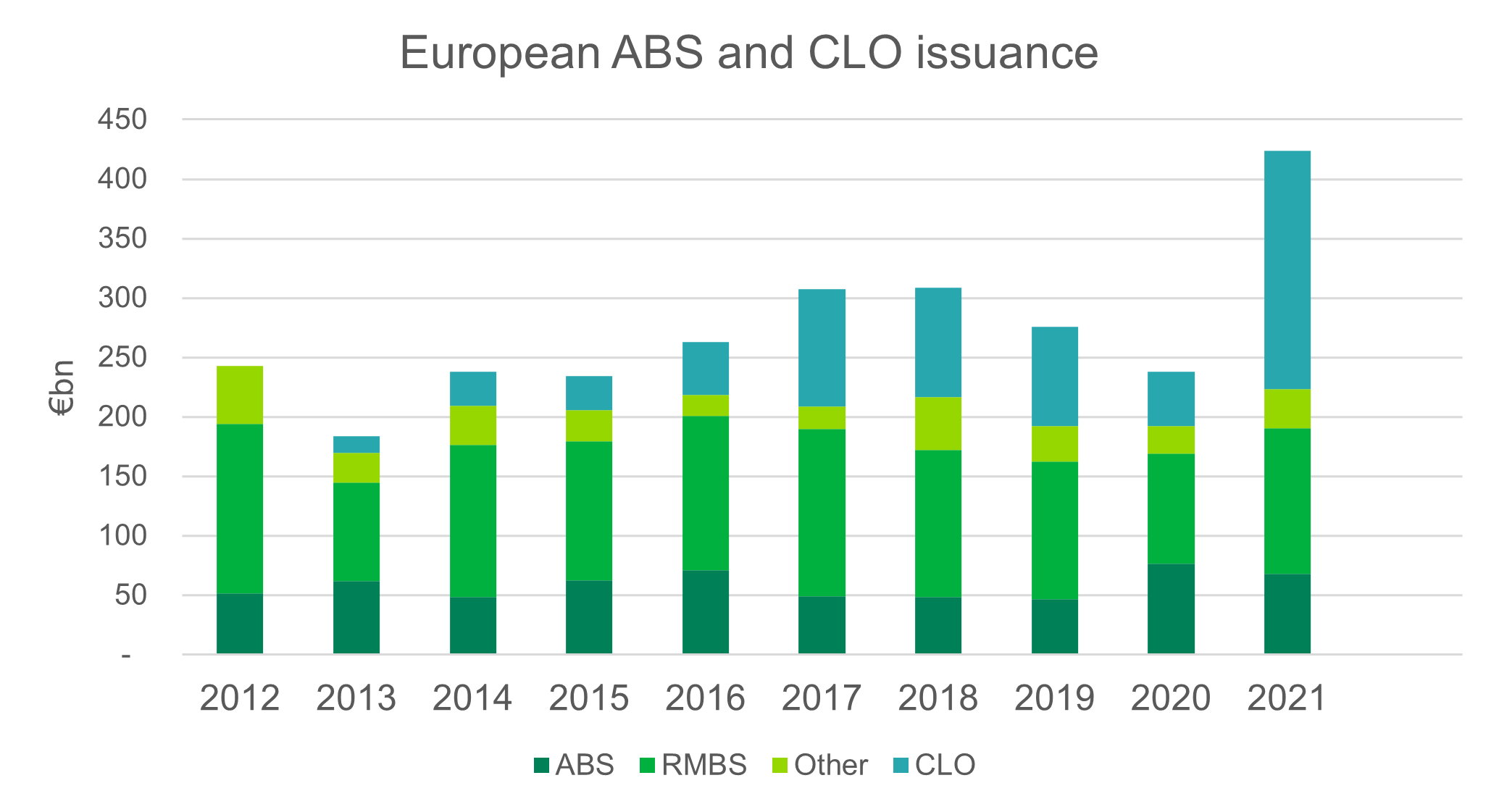 + What kind of spreads do ABS typically offer? + How have the assets performed historically? 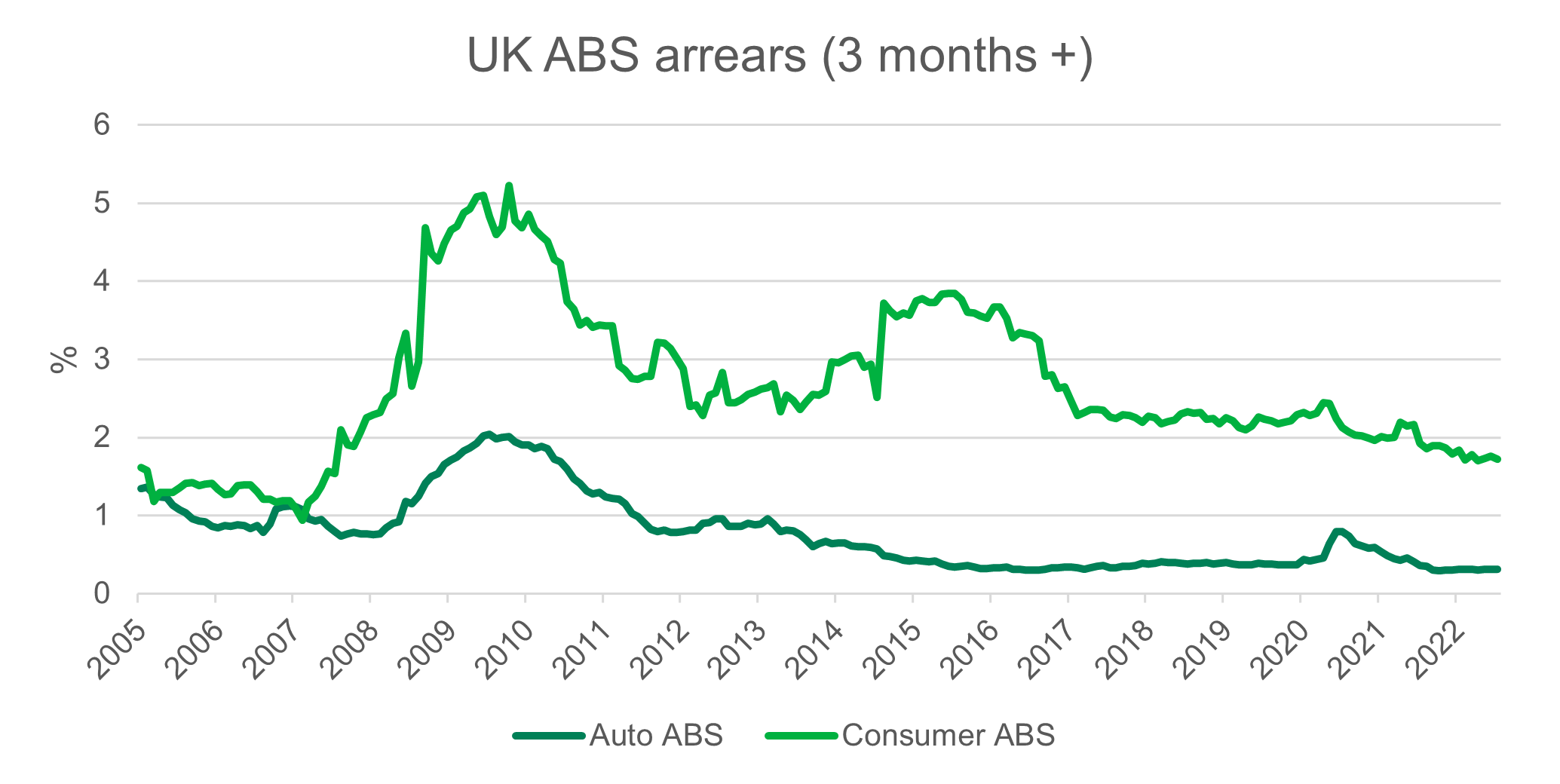 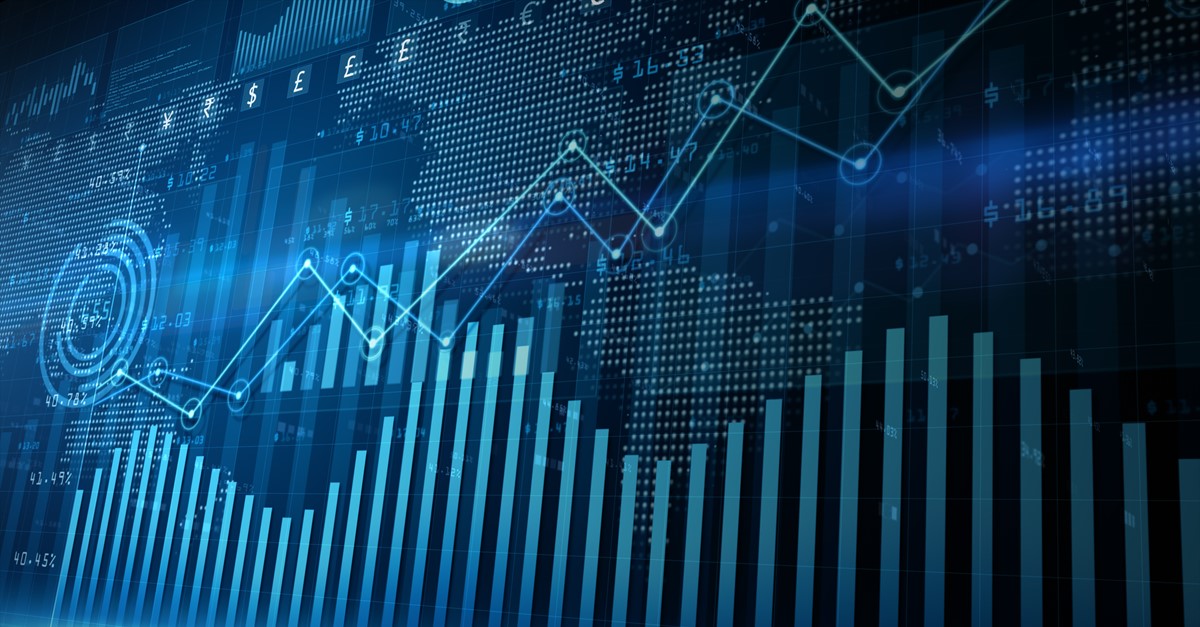 Everything you need to know about AT1s

Additional Tier 1 bonds (AT1s) are part of a family of bank capital securities known as contingent convertibles or ‘Cocos’. Convertible because they can be converted from bonds into equity (or written down entirely), and Contingent because that conversion only occurs if certain conditions are met, such as the issuing bank’s capital strength falling below a pre-determined trigger level. Collateralised Loan Obligations, or CLOs, are bond instruments issued to fund a specific pool of loans, typically senior secured or ‘leveraged’ loans, to companies. The bonds are split into tranches that can carry different ratings (and yields) according to how senior they are in the CLO’s capital structure, normally from AAA notes at the top to equity notes at the bottom.