Given how consistently we have named European collateralised loan obligations (CLOs) as one of our favoured asset classes over the last several years, it is no surprise that more recently clients have been asking why we prefer them to US CLOs.

While European and US CLOs are structurally very similar, there are crucial differences between the markets that can impact some of the key risk metrics we evaluate as fixed income investors. The aim of this paper is to explain those differences, and why we remain convinced European CLOs have a preferable risk-reward profile to their US cousins.

The US CLO market, at around $600 billion outstanding, dwarfs the European market, which is around $130 billion in size. CLO issuance is mainly driven by supply in the leveraged loan market, which has grown significantly in the last decade or so, from $554bn at the end of 2007 to some $1.2 trillion today, of which $200bn is in Europe1. 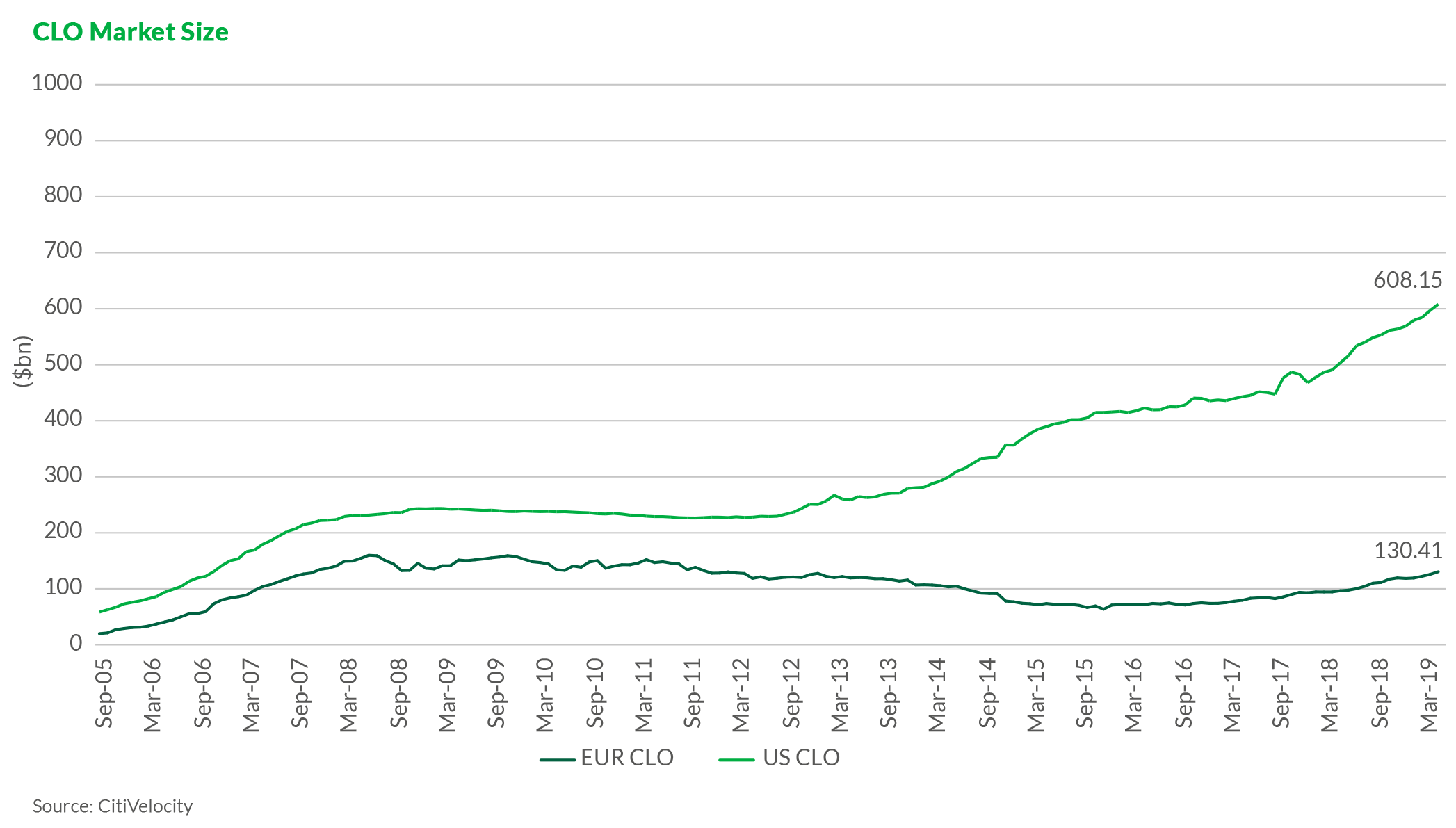 The US market shows a higher number of both CLO managers and leveraged loan issuers. We counted more than 127 managers in the US and around 47 in Europe at the end of 2018. However, the European number has increased in recent years as a wave of US managers have looked to set up European arms.

In the US, the loan market is populated by almost 2,000 obligors, compared with nearer to 600 in Europe. However, Europe has more issuers per euro of outstanding loans, making the European market more granular by both geography and industry than it is in the US.

Liquidity hasn’t been an issue in either market, with a two-year trailing average of $2.2 billion monthly secondary volumes in the US, and €500 million in Europe (roughly 0.4% of each market size). The US investor base is typically more heavy on institutional investors, with insurance companies and banks playing a big role in the investment grade part of the capital structure, and the sub-IG tranches dominated mainly by hedge funds. The European CLO investor base is less concentrated, with asset managers playing relatively evenly across all tranches, with insurers and hedge funds generally being more rating and yield driven.

The characteristics of the two markets are quite different. But what does that mean in practice for investors?

We think it makes European CLOs a better investment from a risk-return perspective, and here are five reasons why.

It is widely accepted that the US economy is at a more advanced stage of the credit cycle than Europe. Warning signs of late-cycle behaviour are slowly emerging. Most sectors in the US have higher debt levels than they did a year ago, net interest margin for banks has moved lower and, according to Federal Reserve data, total US corporate debt as a percentage of GDP is at an all-time high and showing no signs of slowing down.

Rating dynamics are also a good indicator of credit deterioration in an economy. For 2019 year-to-date the upgrade-downgrade ratio in the US stands at 0.72, down from 1.14 in 2018 – that is, downgrades have outnumbered upgrades so far this year, when the reverse was true in 2018. By contrast, in Europe the 2019 year-to-date ratio is currently 1.01, down from 1.67 in 2018, so upgrades and downgrades are virtually even2. This data should give European bondholders more comfort around the stability and performance of their assets should conditions deteriorate further.

The performance of CLO debt and equity tranches is ultimately driven by the  quality of the underlying collateral portfolio, and the cash flows generated by it. A long and detailed set of rules governs the accumulation and maintainance of the CLO pool.

In the US, the average quality of loan collateral has been declining and the deterioration in ratings has been particularly meaningful over the past two years. This has been primarily driven by strong loan demand as investors have reached for yield, allowing sponsors to issue deals with higher leverage weaker structures. Single-B rated loan issuance in the US has reached 20% of the total outstanding, beyond the 12% peak reached in both 2009 and 20163, while in Europe they currently stand at around 10%4, helped by low rates and a prolonged accommodative monetary policy.

Default rates in the leveraged loan market are nowhere near the peak seen during the financial crisis, but the number of CCC rated assets and distressed names have been growing. On average CCC buckets account for more than 6% of collateral in US CLOs and just 2% in Europe. Deals have a standard limit of 7.5% on the percentage of the pool that can be invested in these lower-rated assets. However, some US deals have reached 50% of CCC assets – they’ve been called ‘Enhanced CLOs’, CLOs with larger than average allowances for CCC rated collateral. In Europe these new features haven’t emerged and the maximum % of CCC names has been 7% (somewhat comfortably within the 7.5% standard threshold). Exposure to loans with a market value below 90 has a median of 7% in US CLOs today, double the figure 12 months ago while in European deals the figure stands at 4% albeit this is also trending higher.

Even though ultimate principal losses may not be a broad concern for many CLO debt investors, downgrades on loans could hurt principal coverage tests, which govern the direction of cashflows to noteholders. In the secondary market, liquidity in lower CLO tranches could be impacted by a deterioration in the market value coverage test, a metric that takes into account the market value of all the loan holdings in a CLO.

Introduced in 2016, new risk retention regulations covering both US and European CLOs meant the sponsor – usually the CLO manager – was required to hold at least 5% of the credit risk of the assets in the deal. Most sponsors took a ‘vertical slice’ of the transaction by taking 5% of each tranche, though others met the requirement by taking larger portions of one or more tranches. The goal of the regulators was to force the party structuring the CLO to keep ‘skin in the game’, ensuring the interests of the sponsor were aligned with those of investors, which was undoubtedly a positive feature for bondholders.

However, since February 2018, US risk retention rules no longer apply to US market CLOs. This development has not only driven some European investors out of the US market, but could also negatively impact performance should the economic environment worsen, since in our view some managers would likely put their own interests ahead of bondholders’ in that scenario.

Another key difference between European and US CLOs sits in the capital structure. While the average size of a ‘CLO 2.0’ deal (those structured post-crisis) is around $300-500 million in both markets, the size of the tranches can be quite different. US CLOs usually have AAA tranches with a credit support of 35%, versus 41% in European deals. That means US bondholders could have around 6% less protection from losses than their European counterparts. To be clear, the thicker the most senior tranche of the transaction, the lower the loss protection provided by the tranches below. Equity notes are also different with US equity representing only 5% of the cap structure vs 8% in Europe. With larger AAA tranches and thinner equity, US deals are typically around 1.67 times more levered than European ones. Despite this, they regularly achieve the same ratings, proving to us that the rating agencies have been more tolerant of aggressive structures in the US than in the European market so far. 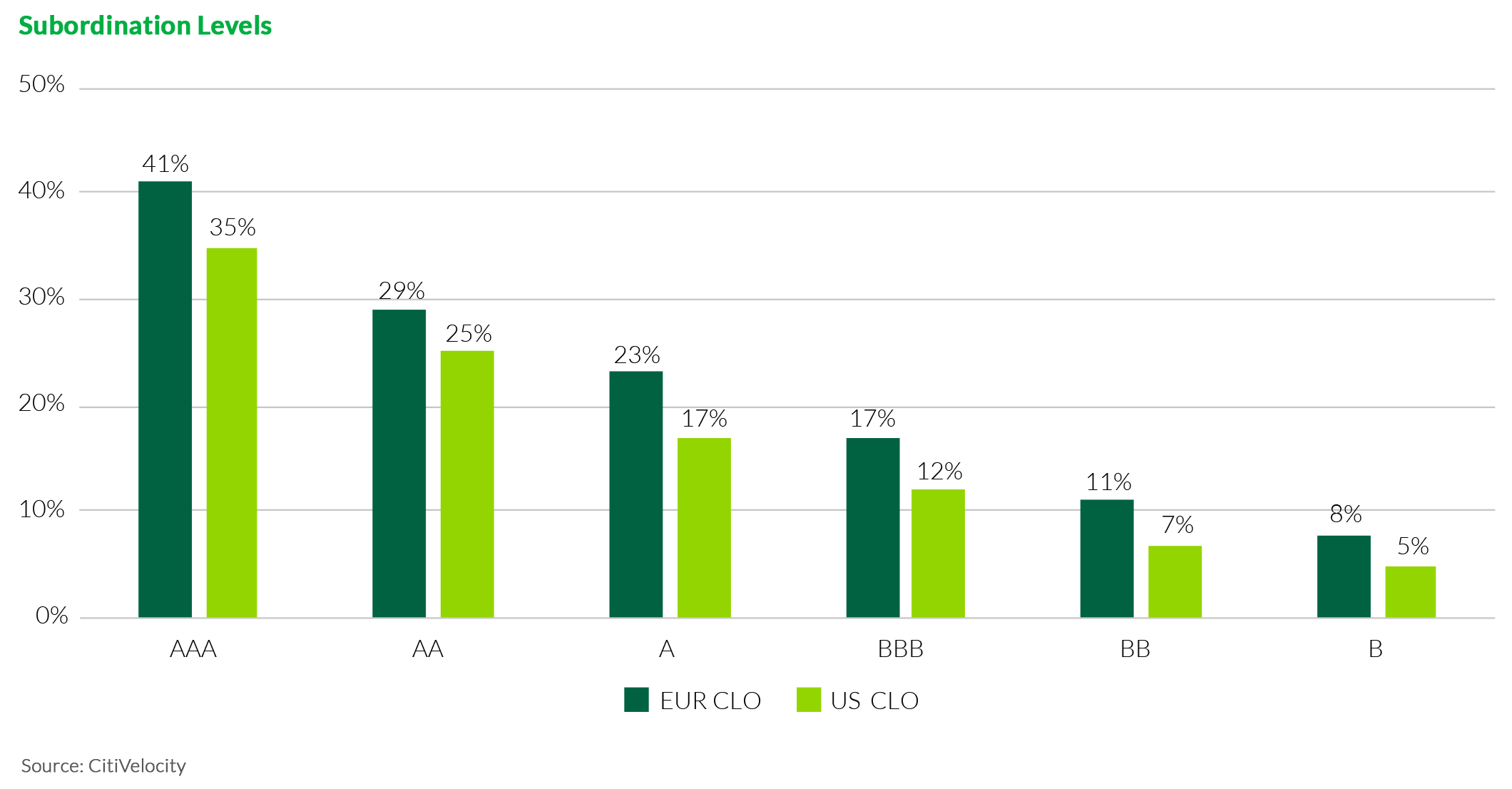 Investors might imagine that the structural differences noted above would mean US CLOs offering slightly better value than European CLOs, as bondholders would need to be compensated for the increased risk.

However, when taking into account the currency difference, euro denominated paper looks much more attractive, both for US and European investors. A typical BB rated tranche of a US CLO currently offers a 700bp coupon spread – the equivalent of only 600bp when swapped back to euros – while a typical BB rated European CLO offers 660bp (756bp when swapped back to dollars), for what we believe is a lower risk asset.

In recent months we have witnessed a wave of US investors coming to the European market, attracted by higher quality names at more appealing spreads.

The points covered in this paper should be food for thought for all CLO investors that aim to set their long- term strategy. When looking at European and US CLOs, investors should be aware of the crucial differences mentioned especially should performance deteriorate. European CLOs can be a good diversifier and an attractive source of income in a period where uncertainties prevail in global markets.

What are AT1 bonds, and how do they work?TwentyFour Income Fund - Investor Update PresentationFive questions for bond markets in 2022